The chat lasted a little bit over an hour and yet only 12 questions were answered.

Here is the transcript. I have left everything as it was, typos and all. 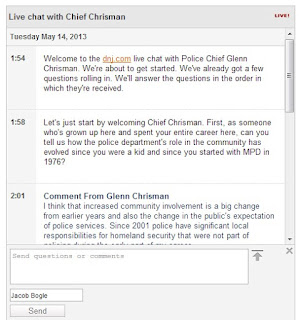 1:54        Welcome to the dnj.com live chat with Police Chief Glenn Chrisman. We're about to get started. We've already got a few questions rolling in. We'll answer the questions in the order in which they're received.

1:58        Let's just start by welcoming Chief Chrisman. First, as someone who's grown up here and spent your entire career here, can you tell us how the police department's role in the community has evolved since you were a kid and since you started with MPD in 1976?

2:01      Comment From Glenn Chrisman
I think that increased community involvement is a big change from earlier years and also the change in the public's expectation of police services. Since 2001 police have significant local responsibilities for homeland security that were not part of policing during the early part of my career.

2:01        Comment From Timothy Meredith
In your presentation to the city council you mentioned that Homeland security is a priority and went as far to reference Newtown and Sandy Hook in defense of the cameras. Are you stating that if we did not have the cameras and had more officers patrolling traffic that we would have a mass shooting or terrorist attack, or be unable to adequately handle a terrorist situation?

2:06        Comment From Glenn Chrisman
No. I think that the use of technology such as the cameras allows us to redeploy police resources for neighborhood patrols, directed patrol assignments, community policing initiatives, school education programs, and other needs. In this way, the use of technology is a force multiplier enabling police resources to be used more effectively in other areas.

2:13        Comment From Glenn Chrisman
The improvements included a new sensor system that included left hand turns at the monitored intersections. While crashes increased for 2011/12 over the 2011 year, there had been a steady decreasing trend at those intersections from 2008/09 through 2010/11. For the period of 2007/08 through 2011/12, side angle collisions at these intersections decreased from 71 to 48, a 32.3% decrease. If side angle crash trends for the 2012/13 year continue as projected we anticipate a significant decrease for this fiscal year. For the same time period (2007/08 through 2011/12) side angle crashes at all signalized intersections decreased from 615 to 359, a 41.6% decrease.

2:13        Comment From Jacob Bogle
Chief Chrisman, you and the Mayor made it very clear that the purpose of the red light cameras was to enhance safety and even showed videos of accidents prior to the cameras being deployed. How would the threat of a ticket deter what were obviously drunk and impaired drivers? Would not an on site police officer make the streets safer by being able to apprehend the drunk drive then & there, instead of having to wait for dispatch?

2:18        Comment From Glenn Chrisman
the focus of the program is to change driver behavior at signalized intersections and to reenforce the message that "red means stop". Impaired drivers are the focus of all police officers including our Murfreesboro Police Alcohol Countermeasures Team (MPACT). Last year in Murfreesboro there were 824 DUI arrests. However, in calendar year 2012, MPD officers responded to an average of over 300 calls for service daily. The use of camera technology allows us to use our most precious resources, our police officers, in the most efficient and economical way possible.

2:18        Comment From Gunner
With websites like 'Photography is not a crime' and public activists, what is the policy for citizens to film police in action from a safe distance and what is a safe distance?

2:22        Comment From Glenn Chrisman
MPD actually has in-car video in most of the Patrol fleet. It is our policy to record most interactions with the public. Any citizen may film police officers from a safe place so long as they do not interfere with the officer in the performance of their duties.

2:23        Comment From Timothy Meredith
You mention that it would allow you to redeploy resources to neighborhood patrols, directed patrol assignments, community policing initiatives, school education programs, but how do any of these subjects relate to homeland security? In a homeland security emergency situation could you not proactively pull resources from all areas including basic patrol? I fail to see how having police patrol traffic would hinder the police department's ability to respond to a Homeland Security situation.

2:27        Comment From Glenn Chrisman
Part of the idea of homeland security is detecting suspicious activity before it turns criminal. By allowing officers to proactively patrol, they observe activities and not only reduce crime, but gather intelligence that could be connected to homeland security threats. Timothy McVeigh (Oklahoma City bomber) was apprehended by a police officer following a traffic stop.

2:27        Taylor Loyal:
With the push for more school resource officers following Sandy Hook, do you feel we have an adequate police presence in Murfreesboro City Schools?

2:30        Comment From Glenn Chrisman
MPD has a team of DARE and GREAT officers that partner with Murfreesboro City Schools to provide a police presence in our City Schools. In addition to the curriculum provided, they assist teachers and administrators with school safety issues and other campus related concerns. At present, I believe we do have an adequate police presence in Murfreesboro City Schools (MCS). We are continuing to work with MCS to strengthen and improve security safety issues.

2:35        Comment From Glenn Chrisman
In order for us to provide traditional enforcement at one red light at the same level as the automated system, we would need a minimum of 4 officers for one approach at one intersection for a limited period of time. By deploying these resources city-wide, they are able to cover more territory and observe for violations in the larger geographical area.

2:37        Taylor Loyal:
We seemed to have seen an increase in gang activity in recent years in Murfreesboro. Can you discuss your creation of the gang task force and how effective it has been?

2:44        Comment From Glenn Chrisman
In 2009 we partnered with CADCOR to implement an anti gang education program for at risk youth and a gang investigative unit whose focus is to investigate and prosecute gang related crimes. The Gang Resistance Education And Training (GREAT) provides anti gang education which begins at the fourth grade level in selected Murfreesboro City Schools. We believe that anti-gang education prepares children to resist gang recruitment efforts, and that target enforcement of criminal violations committed by suspected gang members has improved the safety of our City and its neighborhoods.

2:44        Comment From Jacob Bogle
If we aren't spending money on having officers at the intersections, and if ATS are the ones who operate the camera system, what is the $740,000 allocated in the budget to red light cameras spent on?

2:48        Comment From Glenn Chrisman
When ATS upgraded the system in 2011 the capital investment in the infrastructure replacements was approximately $2.4 million. The expenditure in the Police Budget represents payments to ATS to defray the cost of this infrastructure investment which was no cost to the City. Violators therefore pay for the enforcement of red light violations.

2:49        Comment From Timothy Meredith
Of course they are able to observe for more red light violations, but again how does that help prevent or stop drunk drivers? If Timothy McVeigh got an automated ticket in the mail, would that have stopped him? If a drunk driver gets a ticket in the mail, does that stop them from potentially wrecking into someone after the red light violation occurs?

2:53        Comment From Glenn Chrisman
If officers are able to focus patrols and call responses on other police duties, excluding red light enforcement, they have more time for DUI enforcement, selective traffic enforcement, suspicious activity investigation and reporting among a myriad of other duties.

2:58        Taylor Loyal:
We'd like to thank Chief Chrisman and all of our readers for participating today. We look forward to future live chats. I understand you all have a Peace Officers Memorial Day coming up this week. Could you tell us about that?

2:59        Comment From Glenn Chrisman
I would like to invite the readers to come to the 2013 Peace Officers Memorial Day this Thursday at 9:00am on the Civic Plaza (outside City Hall). The day was set aside by Congress to honor and pay respect to officers who gave their life in the line of duty. Locally, we have lost 9 police officers. Trooper William James, MPD Officer Herbert McClanahan, US Deputy Marshal Sam Vaughn, Trooper Lewis Hendon, MPD Officer Butch Tomlinson, MPD Officer Kay Rogers, MPD Officer Matt Lovejoy, and Trooper Andy Wall will all be honored. Please join us in remembering those fallen officers.


Thank you for the opportunity to participate in this live chat.

The main participants were myself, Axl David and Tim Meredith, and the three of us are co-founders of the Murfreesboro C.A.P.E project. Taylor Loyal is a DNJ employee and was the moderator.

We asked several questions which were not answered including one dealing with the fact that a person who is caught by a red light camera is under no real obligation to pay since the City cannot force them, it is not listed against their driving record and collection agencies cannot list it on their credit report.

Another question dealt with the efficacy of the system and since that there is no direct evidence that the camera system works, why should we install more of them?

As you can see, Chief Chrisman deflected most of the questions, refusing to answer them directly. 12 questions
Posted by Jacob Bogle at 1:24 PM