Tonight, the Murfreesboro, TN City Council approved a 25 year plan to add an additional 150 miles or so of new greenways and bike paths to the Murfreesboro Greenway System by a vote of 4-3. This plan had a minimum cost of $104 million - with no current financial security. Tonight's vote was the final step of a process that began several years ago.[1]

I and many others made our views very clear and at times they were impassioned pleas but in the end the Council ruled, in all their wisdom, that this was something worth doing. There is little chance of stopping the ordnance now, at least until the next election, and I wish I had made my little speech with greater force but all I can do is make my case here in hopes that it can be used in future discussions.

I will start by repeating what I told the Council as my opening remark.


"When governments use money for something, be they the federal government or local, they are by definition taking money from someone else."

At first glance the idea of greenways and bike trails sounds really nice. Currently Murfreesboro has 12 miles of riverside greenways and they are used fairly often. Murfreesboro is also a fast growing city and so the expansion of the system sounds like a logical step to improve the over-all quality of life for the city's inhabitants.

The problem is that whenever government decides it needs additional land to expand something it almost always comes from private citizens. The City's vice mayor, Ron Washington, assured us all that this was simply a "plan for the future" and that nothing was set in stone; no ones land was being taken. And yet, two landowners rose and testified that they had been approached by city agents discussing the acquisition of their land for the Greenway expansion project including a man who turned a rundown property 27 years ago into his own paradise.[2] Another had his land appraised by the city at $1,000. $1,000 for 1.6 acres of well maintained land, with 300 feet of river front and a re-enforced concrete private bridge spanning the river.

Several spoke out in favor of the project and a few even asked that the city go above and beyond the current plan. A supporter said (paraphrasing) "When you break it down you're only spending $4 million a year, well worth it." Of course that ignores the simple fact that what they're asking for is the local government to seize private property for the benefit of the few. Vice Mayor Washington added that land seizure is "unfortunate" and "the cost of doing business." I doubt he would feel the same if it were his land being taken.

Proponents also discussed the positive environmental impact of such greenways. They claimed that the greenways connect small parcels of natural spaces and help wildlife move about. I find that somewhat illogical; in order to protect the natural environment they want to clear cut an area some 45 feet wide and extend that along hundreds of miles; something another opposition speaker mentioned. Then they want to pave a 15 foot wide section of it for all those miles.

From an environmental standpoint, the first few feet of soil (depth) and the plants that grow above are instrumental in filtering out pollution and keeping soil erosion at bay. Clear cutting and paving over miles of territory will negate this natural action. The cleared land will remove the trees and bushes, along with their roots, and replace them with a single species of grass - so much for biodiversity. The paved portions then become a strip of open run-off with no ability to protect the rivers and creeks from surface pollution. One needs only look at the Greenway section which goes along Lytle Creek and beneath Broad Street. Lytle Creek is incredibly polluted at that point. In fact, much of street runoff city wide goes directly into the very waterways they're professing a desire to protect.

Not only does the paving of natural areas to protect natural areas strain the rules of logic you must ask yourself, why are there so few green areas today? The answer is rather simple. The government has continued to approve new constructions, new annexation of properties, and helped to direct the course of environmental destruction. So now, we're asking government to solve a problem it had a hand in creating.

Then there is the economic factor. In a time when every working citizen has had to adjust their budgets to reflect the 2% increase in their taxes and everyone has had to factor in higher gas prices it boggles the mind that our leaders would think such a plan is a good idea. You can't drive to the local mall without seeing homeless people begging for money or a job, but this is a worthwhile expenditure of resources? Supporters have brought up the fact that some of it would be paid for via federal grant money, however, this is a 25 year plan and it is completely foolhardy to expect that the federal government will continue to dole out funds as they rapidly approach insolvency.

The plan also did not take into account the cost of paying "fair market" value for the confiscated land nor the costs for continual maintenance. The plan would cost approximately $700,000 a MILE just to build. Then the City will be on the hook for the additional employees they will need to hire to mow the grass, trim the trees, repave the paths, replace damaged signage, and the additional man-hour costs for security which I will discuss in a moment. All of this is at a time when the City is $396 million in long-term debt, more than double that of 2004.[3] Yes, our debt is slowly being paid off, however there is still no mechanism in place to pay for this program.

A number of supporters talked about the fact that so many families use the system and how they feel safe and love going there. For them, this may be the case. Yet for others, not so much. Even one of the Council members expressed the fact that he did not feel safe on the Greenway and others talked about their cars being broken into.[4] There are many examples of crime on the system which are not limited to adult victims.[5] I also told them that one need only step off the cleared path to find any number of less than enjoyable problems. For example, the Greenway in and around Old Fort Park (a very popular park, especially among children) has illegal encampments of homeless people, used condoms and drug paraphernalia can be easily found. I showed the Council a picture of 4 hypodermic needles which were within 100 feet of the Greenway path right in the middle of the park grounds. 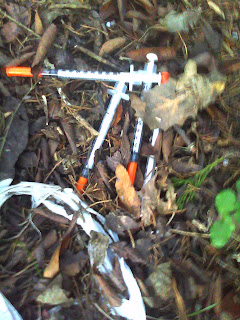 (The image I showed)

If the City can not adequately protect the 12 miles of paths we have now, how do they hope to protect the additional 150 miles of paths? Most of the paths lead away from the city's core into areas that tend to have a smaller police presence. A good many people, including myself, have stopped using the system for this very reason. To me, this is a very real a grave concern; one the Council decided to ignore.

In the end, we have a city in debt who wishes to go further into debt for the sake of recreation. There are multiple parks, recreational facilities and the current Greenway system is popular. That being said, no one is complaining about the crowding, no one has to endure "people-jams" on the Greenway and many citizens flat out do not use it. No one suggested that we destroy the Greenway we have, we just don't think that robbing people of their land to build a massive expansion or financing it with debt or money likewise stolen in the form of taxes is the best way to go. If we need new paths let's build them as we grow. It is a sad state of affairs when we can not finance our own programs without begging for federal money, money that never comes without strings or moral hazard.

As I said, the vote happened and for now there's little we can do about the situation. However, I think this issue should be kept in our minds and remembered during the upcoming election. We may have to wait but there is no reason why we can't reverse this action if we have leaders who will actually defend the rights of citizens and not try to be "progressive" (as some members suggested we expect of them). Rather, we should be a city which places a great importance on private property rights and does not plunge itself into greater financial troubles for recreation.

The 3 brave council members who voted no were:
Toby Gilley, Madelyn Scales Harris and Eddie Smotherman

The 4 who voted for this $104 million "plan" with no means to finance it were:
Mayor Tommy Bragg, Vice Mayor Ron Washington, Shane McFarland, and Doug Young

City Council members Feel free to message Gilley, Harris &amp; Smotherman to voice your thanks, or to message the others and let them know you won't forget this.
Posted by Jacob Bogle at 10:26 PM