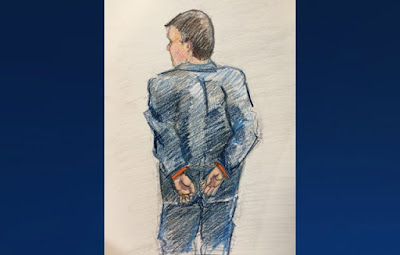 After 13 months of work and a year and 6 days after the initial FBI/TBI raid, Sheriff Arnold, his second-in-command Chief Administrator Joe Russell, and Arnold's uncle John Vanderveer (the owner of JailCigs) were taken into FBI custody and indicted on 14 charges, including fraud, conspiracy, bribery, and extortion. The full 33-page indictment can be read here.

According to the indictments, Arnold received $66,790, Russell received $52,234.41 and Vanderveer received $49,545.50 in payments from JailCigs. The indictment also mentions the April 2015 interview WSMV's Nancy Amons conducted with Arnold, during which he repeatedly lied and claimed he wasn't aware of Russell's involvement - nor his own involvement with JailCigs. However, the indictment clearly shows that Arnold deposited a $3,900 check from the company the day before the interview.

Arnold was released on bond but had his passport confiscated and isn't allowed to leave Middle Tennessee. The arraignment is set for June 7. According to WGNS, Arnold could face up to 95 years in prison if convicted on all counts. It's important to note that so far Arnold and Russell have only been indicted on federal charges, state charges may follow, particularly since Arnold used income from JailCigs to help fund his re-election campaign, pocketed the money instead of turning it into the Rutherford County general fund, and entered into a contract with the company without county commission approval. 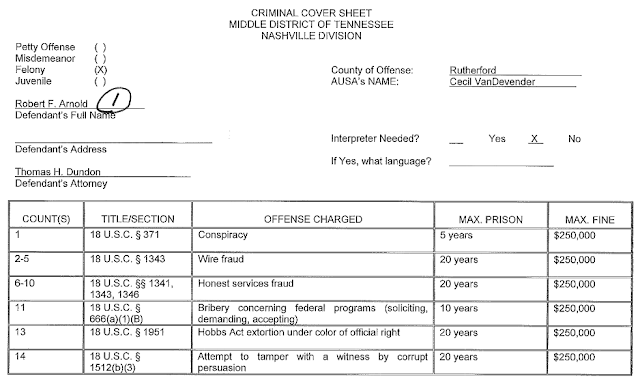 Despite telling the Daily News Journal he has "no intention of resigning," calls for his resignation are mounting. Rutherford County Mayor Ernest Burgress said that Arnold should "seriously consider" stepping down, and state senators Jim Tracy and Bill Ketron have also expressed their desire for him to resign from office.

While the county commission can't fire the sheriff at this point, they should unanimously demand his resignation. The Sheriff's Department has been under a lot of strain due Arnold's and Russell's actions. The ability of the Department to carry out is duties effectively has no doubt been compromised, all the while these men have received hundreds of thousands in taxpayer-funded salaries (and thousands more from illicit sources). Additionally, Arnold recently lost yet another lawsuit for wrongful termination, costing Rutherford County citizens another $340,000 in a settlement, bringing the total amount of money paid out for numerous lawsuits under Arnold's administration to around $1 million.

The people have lost their faith in his ability to serve as sheriff and our county has become a national joke due to his actions. His refusal to step down is an insult to us all. Joe Russell should also, at a minimum, be suspended without pay until the charges are resolved.

Tennesseans Against Corruption will continue to fight for Sheriff Robert Arnold's ouster and demands that the County Attorney, Jim Cope, do his legal duty to assist.

For more information, please LIKE and SHARE our Facebook page, Oust Sheriff Arnold. If you are interested in getting an "Oust Sheriff Arnold" t-shirt, simply send a message via the page. We would also greatly appreciate your donations to help fund the ouster effort legal expenses - https://causes.anedot.com/oustsheriffarnold 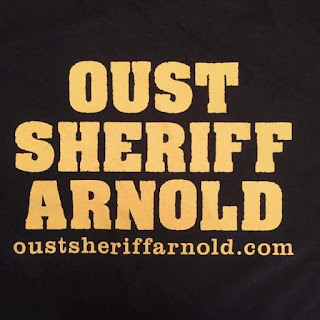