Tonight's council meeting was fairly uneventful. At the start of it there were perhaps 50 people in the audience and by the end there were less than 10.

The key feature tonight was a public hearing on the re-zoning of nearly 90 acres along Memorial Blvd and Haynes Drive. It was the same property from several months ago which resulted in over a dozen people speaking against the re-zoning and letting the Council know their concerns (none-too-subtly either).
The primary concerns were: what type of business(s) would be allowed, water drainage, and who would be paying for the improvements to the property - the City or whatever business ended up moving in?

After being sent back the the Planing Commission, and further discussions and local meetings, the new plan proposed was considerably more appropriate and took into consideration many of the concerns held by those who lived in the area. This particular area consists of 11 individual properties owned by 9 families. Along most of Memorial Blvd are businesses with the exception of this area which is a long-standing residential neighborhood, especially west down Haynes Dr. 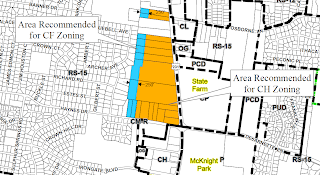 In the end, the representatives of the property owners and the Planning Commission recommended a number of changes to the original proposal. Among them, a 40 foot-wide buffer (twice the size required by regulation) between the re-zoned property and the neighborhood, re-zoning 63 acres as commercial highway but re-zoning a 250-ft wide strip of land (approx 15 acres) at the back of the property (adjacent to the private homes) as commercial fringe, which will further restrict the way that portion can be used. The commercial highway portion (the 63 acres) will be bound by a number of restrictive covenants as well, including: forbidding the construction of adult business, tattoo parlors, communication towers, mobile home parks, and much more.

Additionally, to help tackle the drainage problem that has plagued the area for decades, a small bit of land, about an acre, referred to as the "notch" will be set aside for the construction of retention ponds and other water control systems.

There are still some questions regarding who is paying for the improvements. Various improvements to the property must be constructed before any business would want to purchase the property (and to-date there are no interested parties at all), and before the land could become officially available for development. The general feeling is that, the City will spend perhaps $1 million or more in improvements on what is private property in order to attract business. In other words, the 11 property owners will be getting $1 million in free land improvements and then the land owners will sell the land to a developer for a tidy profit. Will the new owner be required to repay the City or is the City in the business of well, being in business?

Today was only the first reading (three are need for passage) and despite the remaining concerns over who pays for what the proposal was approved unanimously. My opinion is that the City really did listen to the concerns of the public and the new plan is a very good compromise. What actually ends up happening with the improvements and costs will remain to be seen.

Another interesting item tonight was the passage of a 5 year "master plan" for the City's IT Dept. The plan was very well thought out and the items, programs, applications etc requested made perfect sense. It also was approved unanimously. My main concern is that the plan costs $9.5 million. Granted that's over 5 years so $1.9 million/yr or about 1.6% of the budget; however, the 15 minute proposal did not include any cost-benefit analysis and I gathered that they hadn't even begun the process of figuring out how much (if anything) the IT plan would save the City. I am fairly sure that the plan will, in the end, save the City real money and energy but at the same time I am a little disappointed that they approved something without having full knowledge of the tangible benefits it would bring.

At one point in the meeting Mayor Tommy Bragg said "We consider our town to be a city within a park." Murfreesboro is a beautiful city and everyone wants to live in a lovely area. Yet, when you look back at all of the problems arising from the Mayor's insistence at funding any and every matter of leisure and aesthetics I found the statement in very bad taste. The City is $230 million in debt, they approved a $105 million plan (without secured funding) that will inevitably lead to more debt for enormous Greenway expansion, the City spends $2 million a year on golf courses - golf courses which by my figures have actually ran a deficit to the tune of $721,000 since 2010, we spend over $15 million alone on recreation every single year. This includes $11,000 for freaking trophies, $6,000 for trashcans, iPads, TVs etc, and the "recreation budget" is one of the largest expenditures the City makes. We spend nearly as much on leisure as we do on our Fire Dept!

I would like to live in a beautiful city. On the other hand, I would rather go without golf if that meant we had the money to build sufficient sidewalks and enough schools without having to go deeper into debt or without needing handouts from the federal government. As it stands, without debt and federal aid we can't build schools. Perhaps the Mayor needs to get his priorities straight.