Yesterday, July 24, 2013, the Daily News Journal published this article on a future west-side park. The park would encompass approx. 410 acres and cost $20.6 million over the course of several years. The main call for the park comes because of the population growth on the western side of Murfreesboro.

This $20.6 million park would be on top of the $104 million Greenway/Blueway "Master Plan" and in fact several miles of new greenways and multiple trail heads are already planned for areas west of I-24 (within the "Master Plan"). They will connect Barfield Crescent Park with Old Fort Park and the rest of the city. There is no doubt that the city's population is growing, however according to the 2013-14 budget the population growth has slowed tremendously in recent years compared to the rest of the 2000s. [pg 24]

City government seems to be under the delusion that population growth will continue at an exponential rate for years to come and based on that growth they can continue to spend more and more money. This is a fallacious defense for the spending. While Detroit is a severe example, the city experienced rapid population growth between 1900-1960, and then the good times ended and the city's population has dropped every year since. This collapse has left many a once beautiful park to become overgrown and the home of vagrants. Murfreesboro's population growth outpaces the growth of the State's population by over 40% which means in order for Murfreesboro to grow other areas must lose population. In fact, Murfreesboro is the main driver of population growth for the entire county. However, 25,000 of the people in Murfreesboro attend MTSU, a great many do not stay in the city once they graduate. This means that the City must provide services for these students (police, fire, parks, roads etc), but doesn't get the benefit of decades worth of tax revenue that a long-term resident brings in. I mention this only to further the point that while the City Council appears to plan for things based on a permanent population and continual growth, we must realize that those numbers are inflated when you consider the student population.

For the 2013-14 budget, the City expects a revenue increase of 1%. They City also makes a point of letting us know that revenues for the City are still less than those in 2009. [pg 13] The City has also conceded the issue of property taxes; 2014 will be the 15th year without a property tax increase. Yet, despite population growth, revenues from property taxes continues to fall. [pg 14] They have exchanged raising property taxes for the ever rising revenues generated from sales taxes. [pg 15]The City has hitched themselves to sales tax revenue, revenue which must depend on a growing economy (which is still anemic nationally) and a growing population (which is beginning to slow).

The following graphs shows you the trends in revenue and expenditures. Logically, they should be correlated, but spending outpaces revenue. 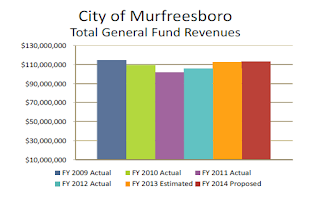 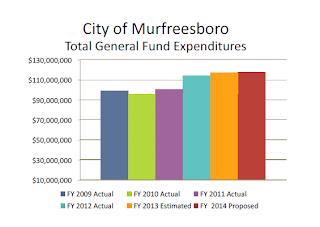 Revenues have grown slightly over the past few years, but not at the pace spending has increased. The City expects revenue of $113 million for 2013-14, of this slightly more than 10% is earmarked for the "recreation" budget (golf courses and parks). And while 10% may not sound like much, it amounts to the 3rd largest single expenditure (after police and fire). The most disturbing thing however, is the growth year-over-year of the recreation budget compared to other departments and the overall budget.

The problem isn't that parks are evil or that we don't want to live in a beautiful and enjoyable city. The problem is that, when federal and county taxes continue to rise, when the incomes of citizens are barely increasing, the City deems fit to spend ever more millions on parks. The City spends more on recreation than the combined budgets of the Senior Citizens Dept., Transportation Dept., Solid Waste Dept., and Public Health & Welfare Dept. [pg 39]

It simply does not make sense.