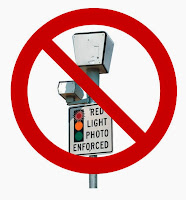 At Thursday's City Council meeting (Nov. 13, 2014), the Council will vote whether or not to renew the contract with Arizona based company American Traffic Solutions to operate the six red light photo-enforcement cameras in Murfreesboro for another year.

As the Daily News Journal noted, during last week's Council meeting, multiple citizens were able to speak against the cameras including, Axl David, Keith Rae, Marnie Harris, Steve Lane, myself and others. However, more work needs to be done, and quickly. 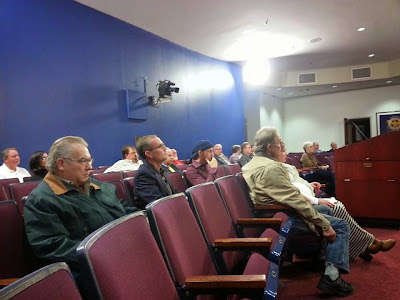 Please email, call, or personally meet with members of the City Council and tell them that you oppose these cameras and do not want the City to renew their contract with ATS.

For more information on the matter, please read this. Feel free to use it as a resource as well. This is based on a letter I gave to each council member.

On April, 30, 2013, Chief of Police Chris Chrisman provided the Council with a report on the City's red light camera system. It shows in black and white that these cameras are not as effective as claimed. It showed that since 2010, the number of total crashes at camera enforced intersections decreased 1.1% per year, whereas the number of crashes at all intersections decreased 11% per year. Furthermore, when it came to side-angle crashes (which are more dangerous than rear-end collisions), it showed that they decreased 32% since 2008 at the six photo-enforced intersections, yet, the overall decrease at all intersections was nearly 42%. 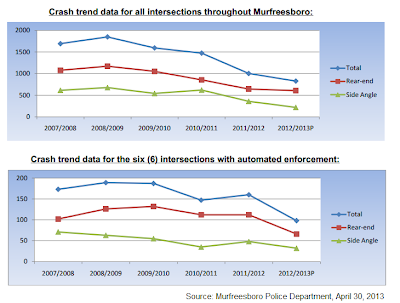 In the same report, the new system that was installed in 2011 was referred to as an “improvement” and “reduced collisions overall”. However, in that handout, the data shows that collisions at photo enforced intersections had actually increased in the year following the new equipment installation. The City’s budget also shows that, contrary to the claim that these systems are working, the Police Dept. anticipates continued growth in the number of tickets – a growth that actually outpaces population growth. Again, evidence that these cameras aren't working. 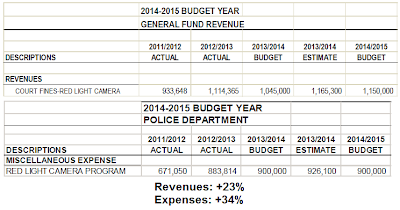 On top of that, each year ATS receives the full $50 citation fee for the first 1,200 tickets, and then they get $25 for each ticket afterwards. That means over $2 million dollars has left our community to go to an out of state company to run this camera system.  Let’s also not forget, that because of how the law governing these cameras is written, the City has voluntarily accepted (no one's requiring they use them) a camera system that gives two very different punishments for the same crime when it comes to being ticketed by a camera vs. by being pulled over by a police officer; which may be a violation of the Equal Protection Clause.

In 2012, the State Legislature amended T.C.A 55-8-198 (Citations based on surveillance cameras) with TN Senate Bill 2872 by Sen. Southerland, which specifically states:

However, the citations issued threaten that any failure of payment will be reported to consumer and credit bureaus, and that it may damage the person’s credit rating. This is completely wrong. 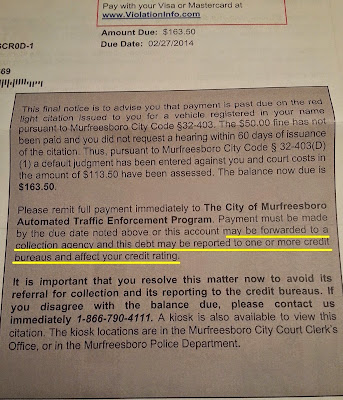 Murfreesboro C.A.P.E. also set up a petition through which hundreds of other local residents have all expressed support for ending the red light camera photo-enforcement program. Some of the people who signed the petition include: James Gann, Bruce Cavender, and Gabriel Fancher. The petition, which is now closed, can be found at https://www.change.org/p/murfreesboro-city-council-eliminate-red-light-photo-enforcement-in-murfreesboro.

We have all asked the City Council unequivocally, to end the use of these cameras. These cameras have already been banned in 7 states (AR, ME, MS, MT, NV, NH, and WV), they have been removed in multiple communities across the country (including Mt. Juliet), and courts have ruled against this type of camera enforcement in 2 additional states (CA and MO).

I ask you, if the real reason to have these cameras is safety – and the City’s own data proves that they are not effective – then why have them? Why renew the contract for equipment which doesn't work, and may actually be decreasing the safety of drivers?

For more information, check out:

Red Light Camera Studies
Posted by Jacob Bogle at 10:58 AM