On Thursday night we had a City Council meeting. Both Shane McFarland and Madelyn Scales-Harris were absent. 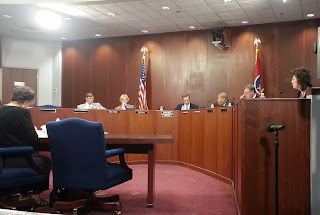 The agenda was rather full with 12 items for new business and of those 6 were public hearings for re-zoning and annexations. There were also presentations and requests from the IT Dept, City Schools and an award for our City Police.

First, I'll start with the award. It was given to the Murfreesboro City Police Dept. in recognition of their newly earned accreditation from the Tennessee Association of Chiefs of Police. To qualify, the Department had to achieve 160 individual standards and our police department was only the 22nd department to receive this award since it was created. And there are some 600 law enforcement agencies in Tennessee which report directly to the Tennessee Bureau of Investigation so this was a very special award.

After the award, the first 3 agenda items were uneventful and all passed unanimously. The next three dealt with properties off of Veterans Parkway and the applicants sought to have the properties re-zoned and annexed to the City upon re-zoning. The main concerns were that these properties were barely adjacent to current city limits and that Tennessee law forbids "islands" of county within a city. Application 2013-506 (27 acres) was able to circumvent this via a 30-foot wide strip of land and some speakers thought that while this did not violate the letter of the law, it did violate the spirit of it.

Further concerns were school overcrowding since these properties will most likely be developed as apartment complexes or other high-density regions and that there may be no real need for additional high-density areas given the vast number of similar applications the City has approved. I ended up saying a few words to the Council about the final re-zoning application (2013-418).

I first asked about the question I know many of you have been wondering about: the annexation "ban."  It was explained that if the property owners request the annexation then a city is allowed to annex the properties. So now we can finally move past that point and I appreciate City Attorney McGannon for taking the time to clear up the misunderstandings. Councilman Gilley thanked me for my question while we were in the elevator after the meeting and said he realized there had been a lot of confusion over the subject.

I next brought up the fact that these properties actually fall within the 25-year Greenway Master Plan and I asked if any of the applicants realized that a portion of their properties were actually at risk of being taken by the City via eminent domain. I didn't expect any replies to that and I received none. All of the re-zonings and annexations were approved unanimously.

Next came agenda item #13, recommendations from the Chief of Police and Chief of Fire & Rescue requesting the reallocation of unspent funds. The amount in question was $490,000 which came from cost savings on various expected purchases (and so no new money was being spent). They requested the money be reallocated to help build a training facility. It was approved by the Council.

Councilman Smotherman asked Chief Chrisman about the newly acquired MRAP (Mine Resistant Ambush Protected) vehicle. Chief Chrisman explained the vehicle's capability and why he felt the Department needed one. To be honest, I fully accept his explanation in light of the fact that while a MRAP looks scary it isn't a tank nor does it have the capabilities so many have ascribed it. From his explanation, prior to this acquisition our police department did not have the capacity to safely respond to events with high-powered long-range weapons and the MRAP is rated to withstand 50 caliber fire. Further, it was free and several police officers and members of the City's Fleet Service Dept. are veterans and have actually worked on MRAPs and are familiar with the maintenance of them.

Item #14 dealt with the City's phone system and a proposal from the IT Dept. director. Apparently, the phone system currently used is over 20 years old. The Director recommended a total replacement and upgrade of the phone system which would cost $313,000. The costs were already in the budget and the new system is expected to actually save the City $57,000 a year - paying itself off after 5 1/2 years. The new system is estimated to last 10 years. This was also approved.

Finally, Item #15. This dealt with mandatory technology upgrades imposed by Common Core. Dr. Linda Gilbert, Director of Schools gave the presentation and answered most of the questions although there were other members of the School Board and IT  Dept. there to help as well. Research into these changes began 2 1/2 years ago and will need to be fully implemented by Feb. 2014 if the schools are to meet Common Core testing deadlines.

To meet the requirements, city schools will need to enhance their IT infrastructure to handle the new technological loads and will require $5.2 million in upfront costs for the infrastructure, computers and other equipment. The goal for pre-K is to have 5 iPads per class, grades 1 and 2 will have 1 iPad per two students, and grades 3-6 will have 1 laptop per two students. In all, some 5,000 devices will need to be purchased for the students and staff. The devices are expected to last 5 years so they will need to be replaced regularly as well as continual updates, training, repairs etc which breaks down to an average cost of $800,000 each year - every year. In the words of one of the speakers (I didn't catch his name) "extraordinary new dollars may be required" for the program.

The Board was not prepared to recommend a specific way to fund these mandates and sought an extra two weeks to finalize their plans. However, based on the discussions it is very clear that at least part of the money will come from borrowed funds next year. Other monies may comes from the general fund, reserve fund, savings on debt payments, etc.

While no one disagrees that today's students need to learn computer skills and need to be fully prepared to be able to operate with ease in a highly technological world, the problem is we're having to spend millions at once on something (Common Core) that has a very short operational history and we don't know if it's going to be successful. As Councilman Smotherman pointed out, every few years our schools are forced into some new and improved education program - No Child Left Behind, Race to the Top etc and yet we receive no assistance in actually implementing the changes. Tennessee agreed to Common Core and received monies, but local school districts and cities are not allowed any access to those funds.

As was explained, Murfreesboro schools are in one of the best positions (of all the school districts in the state) to absorb these costs, but many smaller counties and towns are not. Some municipalities were forced to completely deplete their reserves just to buy the required equipment. The City approved the agenda item expressing their intent to fund the mandate. Actual approval on how to fund it and the finalized costs will be done in Sept.

The struggle to pay the $5.2 million plus the added yearly $800,000 brings me to my main "hot button" topic - city recreation. The City's Recreation Dept budget has grown at faster pace than pretty much any other department and at a faster pace than the general revenues the City receives. Since the City has no choice but to implement Common Core, and since most people tend to agree that the technology itself is needed, why not lay off the golf courses and tennis courts and pay for our children? Just a thought.