The Republican Women of Rutherford County hosted a "meet the candidates" event for those candidates running to fill Rep. Rick Womick's spot when he retires as State District 34 State Representative. 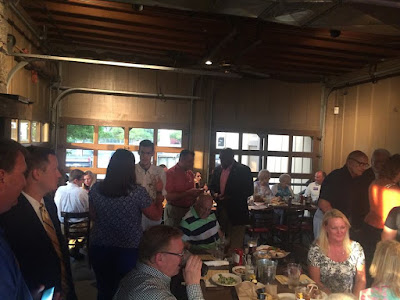 A group of 35-40 meet at Logan's on Broad Street to hear three candidates, Tim Rudd, Christy Sigler, and Jimmy Turner, give their pitch and answer some questions. There is a fourth Republican candidate, Joshua James, but he wasn't able to attend. Each candidate was given 5 minutes for opening statements and 5 minutes to answer questions. Here's what they said in order of their appearance. 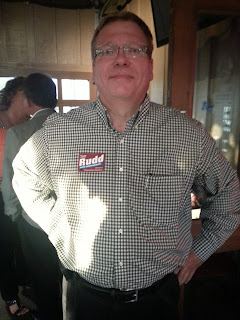 He has lived in the district since 1973 and has been active in politics since 1986. He describes himself as a fiscal and social conservative who wants a "less intrusive government", "more freedom in schools, " and wants the state to "pay for things as we go".

During the Q&A session Mr. Rudd said he supported the Second Amendment including the right of citizens to own AR-15s. Instead of passing new gun control measures, he feels we should better enforce the laws already on the books. Also regarding gun violence, he believes that a key issue is that of mental health and asserted that most mass-shootings were committed by people with mental illness and that the state should take a renewed look at how we handle those with mental illness.

He was also asked about the addiction problem sweeping the country and said it definitely needed to be addressed, noting that opiate addiction plays a role in violence and our general economy. When asked his views on public education and where he stands on charter schools and vouchers, he said he's "100 per cent" in favor of charter schools and would be willing to look at other options including school vouchers.

I asked him if there were any specific issues he wanted to focus on if he goes on to win the primary and general election. He said his main focus was going to be on job recruitment and the economy. He said we're not doing enough to train and recruit, particularly when it comes to blue collar jobs. He'd like to see schools and universities work together while also providing incentives to keep jobs here. He is also concerned with our infrastructure and when I asked about a proposed high-speed rail service in our area, Rudd said that he needed to do more research but was generally in favor of it, saying that we needed one. 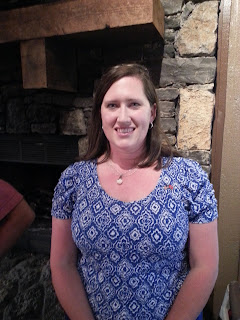 During her opening statement she stressed that her views and actions stem from personal conviction, and doesn't simply "tow the party line." She served in the military and is now a lawyer focusing on children, grandparent's rights, and helping kids who have been neglected or abused. She has served on the Tennessee Commission on Children and Youth since 2011. One main focus is on getting state and local government to be better coordinated to address the various issues that face citizens.

Sigler also stated she supported the Second Amendment and doesn't want to make things more difficult for citizens, but said that mental heath is an issue. She wants the state to maintain control over immigration and refugee resettlement. Sigler supports the Human Trafficking Court in Nashville and says that we need to do more to address the issue, noting that "Middle Tennessee is a sex trafficking hot spot".

On education, she spoke about her autistic son and said that students shouldn't be forced into a one-size-fits-all box since each student is different, and that she is open to looking at all alternatives and ideas to improve education.

I also asked her what specific areas she wanted to focus on, her answer was education. She said that the entire system needed to be cleaned up, made more efficient, and needed to have "politics" taken out, citing the controversial problems over PARCC testing. She continued, saying that she also wanted to focus on the addiction problem. I asked her thoughts on mandatory sentencing for non-violent offenders, she responded that she recognizes there are problems with the system that needs to be fixed, and that she is more worried about violent criminals being released prematurely or being given light sentences. 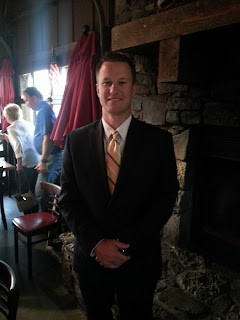 Mr. Turner is a local lawyer and his wife is a reading teacher for students with learning disabilities. He proudly asserted that he "escaped Memphis" and came to Rutherford County and is very proud to have made his home here. Turner recounted the life story of his mother as she fought for respect in the male-dominated world of electrical work. He credits her with teaching him the lessons of hard work, honesty, and integrity. He also said that the large number of people moving to Tennessee are coming here because we are a freer and more conservative state, and he wants to help maintain our liberties.

As a member of the NRA and TN Firearms Association, his answer to gun control was simple, "Constitutional carry," and noted that things like gun-free zones make it easier for criminals and terrorists to attack. He supports low taxes and stated he strongly opposed any increase in the gas tax.

When asked, he said his main issue is also education, and said that he supports the principle "the money should follow the student." He brought up the fact that states are "laboratories of democracy" and that we shouldn't be afraid to try new things, especially if they're already working in other states - such as charter schools. He opposes Common Core.